What is it, how to spot it, propaganda today & propaganda in history.

"Propaganda is the more or less systematic effort to manipulate other people’s beliefs, attitudes, or actions by means of symbols (words, gestures, banners, monuments, music, clothing, insignia, hairstyles, designs on coins and postage stamps, and so forth). Deliberateness and a relatively heavy emphasis on manipulation distinguish propaganda from casual conversation or the free and easy exchange of ideas. The propagandist has a specified goal or set of goals. To achieve these he deliberately selects facts, arguments, and displays of symbols and presents them in ways he thinks will have the most effect. To maximize effect, he may omit pertinent facts or distort them, and he may try to divert the attention of the reactors (the people whom he is trying to sway) from everything but his own propaganda."

We are all bombarded by an incredible amount of information every day--there is no way to take it all in. This is called information overload.

The Internet and Social media have made propaganda easier to disseminate than ever before. Information overload and confirmation bias make it easier for us not to notice when we are being exposed to propaganda.

Why Should You Care?

Propaganda goes beyond media bias. Propaganda is a deliberate attempt to change the outcome of events in real life. Those employing it target specific groups and try to get them to behave in predetermined ways.

Propaganda is also psychological warfare, though it is not used exclusively in actual wars. Propaganda is used by our own politicians and special interest groups as well as external forces.

WWII Propaganda to Discourage the Enemy

World powers spread information to discourage the enemy into thinking that losing was inevitable so that continuing to fight would become harder. Radio broadcasts were made to give negative news to the enemy on both sides of the war; news stories were printed with information favorable to the side printing it; leaflets were spread to show the enemy how futile there efforts were. The leaflet below targeted to Japanese troops to induce surrender showing Japanese prisoners of war with cigarettes.

Propaganda was also used on citizens and allies to encourage them to support the war effort and to keep going. With so many men away at war there were not enough workers left in the country. Prior to this, women had been only a very small part of the labor force, most being housewives. In order to keep the troops supplied women had to be put to work. The news story below shows women working to supply the war effort. The famous We Can Do It! poster (shown in the banner above) is another example.

One of the most extreme examples of propaganda was Hitler's campaign to foment the hate of anyone that was not the Aryan ideal, particularly Jews. The result was the massive genocide known as the Holocaust, during which over 6 million Jews were killed. In the end many others deemed undesirable were included, such as gypsies, homosexuals, and the disabled.

This image translates to "Whoever wears this symbol is an enemy of our people." It was used by the Nazis to justify Jews wearing the Star of David; all Jews were made to wear this star in Nazi Germany. 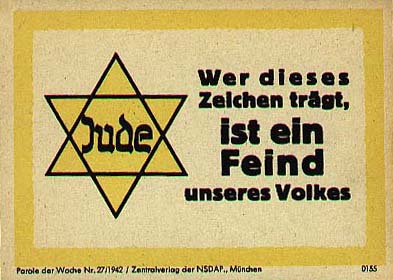 Nazi propaganda leaflet: “Whoever bears this sign is an enemy of our people”.

How to Spot Propaganda

This is our new normal. Fake news, bias and propaganda have never been so easy to spread. We now know that this can have real life consequences. So how do we deal with it? How can we spot when we are being exposed to propaganda?

From 1937-1942 there was actually an Institute for Propaganda Analysis. The founders thought propaganda was becoming so prevalent in the US that it was a threat to democracy. How can citizens vote in an informed manner if they don't know what the truth is? The list of common propaganda tricks that they developed can still be used today. Most propaganda techniques invoke strong emotion in those hearing, seeing or reading it.

The individuals that are calling for stricter gun control laws as a result of the mass shooting at Stoneman Douglas High School in Parkland, Florida are "Crisis Actors" that are paid to go from protest to protest.

The individuals accused of being crisis actors are in fact real Stoneman Douglas High School survivors of the mass shooting in Parkland, Florida expressing a desire to see changes in gun control laws based on what they experienced. 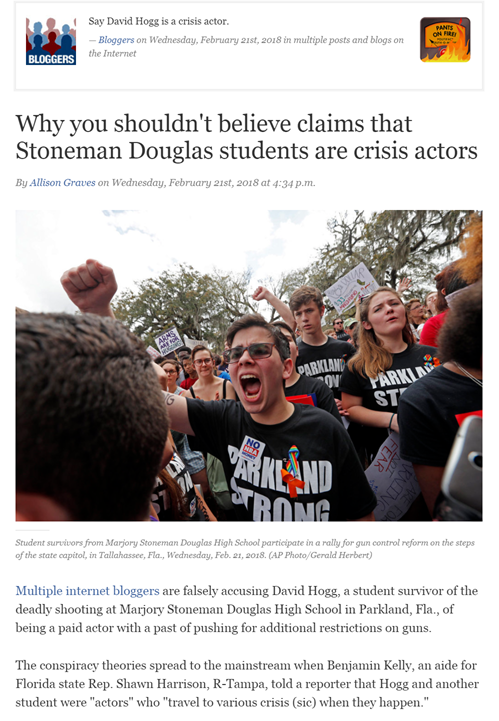