September 8, 1900. It remains the deadliest natural disaster in US history. 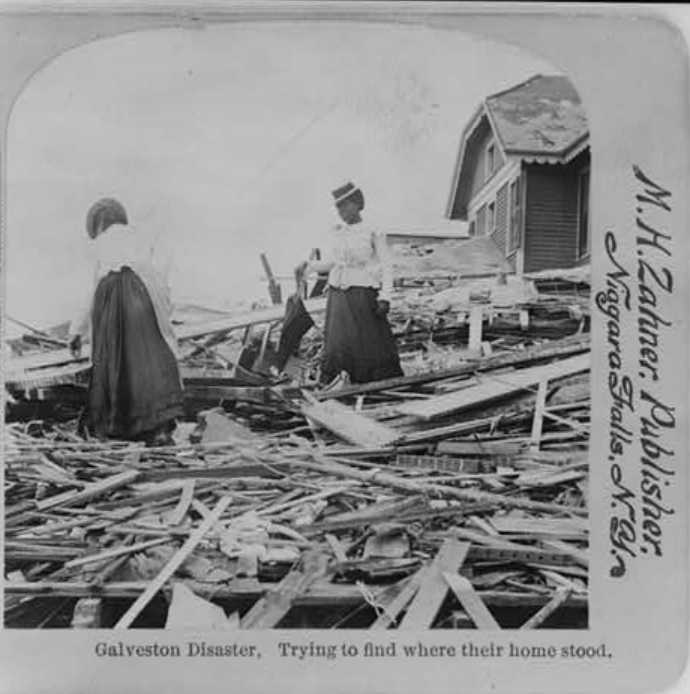 In Galveston on the rain-darkened and gusty morning of Saturday, September 8, 1900, newspaper readers saw an early-morning account of a tropical hurricane prowling the Gulf of Mexico.

Except for the rain and wind, Saturday began in the city of 38,000 inhabitants much the same as any other weekday. People prepared for another stint in the routine of six-day workweeks then common; not even an encroaching tide disturbed them greatly. Galvestonians had become used to occasional "overflows," when high water swept beachfronts. Houses and stores were elevated as a safeguard.

The Weather Bureau official in charge locally, Isaac M. Cline, drove a horse-drawn cart around low areas warning people to leave. Comparatively few people had evacuated the city, however, before bridges from Galveston Island to the mainland fell, and many people along the beach waited until too late to seek shelter in large buildings in a safer area downtown, away from the Gulf. Houses near the beach began falling first. The storm lifted debris from one row of buildings and hurled it against the next row until eventually two-thirds of the city, then the fourth largest in Texas, had been destroyed. People striving to make their way through wind and water to refuge were struck by hurtling bricks and lumber and sometimes decapitated by flying slate from roofs.

The greatest wind velocity registered before the anemometer blew away at 5:15 P.M. was an average of eighty-four miles an hour for a five-minute period, but gusts of 100 miles an hour had been recorded, and weathermen's estimates later reached more than 120 miles an hour. About 6:30 P.M. a storm wave, sweeping ashore in advance of the hurricane's vortex, caused a sudden rise of four feet in water depth, and shortly afterward the entire city was underwater to a maximum depth of fifteen feet. This storm wave caused much of the damage. The lowest barometer reading was 28.44, recorded shortly after 7:00 P.M. Around 10:00 P.M. the tide began to fall slowly, and little damage occurred after that.

September 9 dawned on desolation. Most of the city lay in shambles. Between 6,000 and 8,000 people in the city of Galveston had died, and estimated casualties for the entire island ranged from 10,000 to 12,000. Property damage is impossible to estimate by current standards, but contemporary figures ranged from twenty to thirty million dollars. A high-water mark of 15.7 feet and high winds had destroyed a third of the city, including 2,636 houses and 300 feet or 1,500 acres of shoreline. The sixteen ships anchored in the harbor at the time of the storm also suffered extensive damage.

More violent and costlier hurricanes have struck coastal areas of the United States since 1900, but because of the death toll the Galveston storm that year was still called the worst recorded natural disaster ever to strike the North American continent.

From GALVESTON HURRICANE OF 1900 in the Texas Handbook Online
Image: September 8, 1900, from the Library of Congress