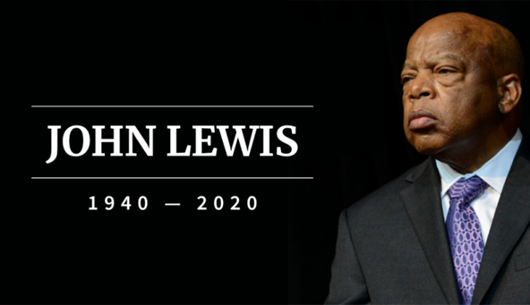 An African-American civil rights leader, John Robert Lewis served as a congressman known for his unflagging support of racial integration. As a student in 1964, Lewis went to Mississippi to take part in Freedom Summer, the drive to register black voters in that state. He later joined King's voting rights march from Selma, Alabama, to Montgomery, where marchers were met with state troopers, deputies, and posse members who assaulted them with tear gas, fire hoses, and clubs wrapped in barbed wire on the Edmund Pettus Bridge. Lewis was knocked to the ground, his skull fractured. As a congressman Lewis continued to pursue his civil rights agenda, tied to his belief in a racially integrated society. Despite Lewis's notable record in Congress, he will likely be most remembered for his fortitude in the 1960s civil rights struggle, as historian Sean Wilentz described him as “a valiant, bloodied hero of the nation's greatest domestic struggle” in the 20th century. See more from CREDO. Must be on campus or login with COM ID off campus to access.

Get an overview from COM Library databases. Must be on campus or have a COM ID to access off campus.

Try these articles to get started. Must access on campus or have COM ID for off campus access.

Stream these videos on McCain. Must access on campus or have COM ID for off campus access.

Vital Speeches of the Day is a monthly collection of the best speeches in the world. Read McCain's top speeches. Must access on campus or have COM ID for off campus access.