Focus on Discovery of America 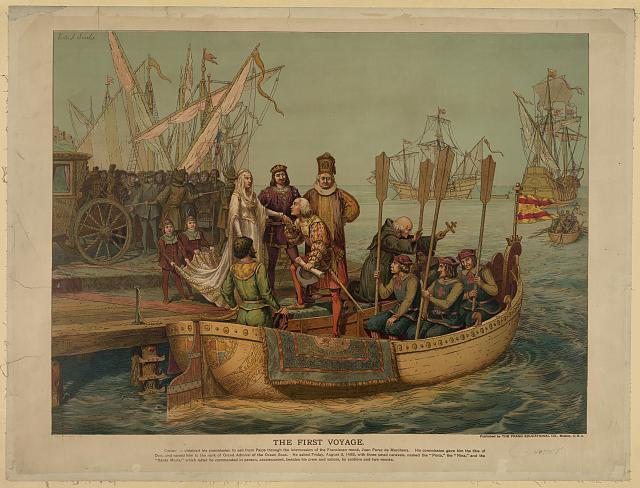 The idea that Europeans “discovered” America in 1492 has been a basic assumption of American history, but it would be more accurate to say that Columbus's voyages led to the “first permanent arrival of Europeans in the Western Hemisphere.” Millions of people and dozens of cultures thrived in this half of the globe long before Europeans came.

All discoveries of America were accidental. In prehistoric times, the ancestors of American Indians migrated from Asia via a then-existing land bridge across the Bering Strait; they were probably hunters following herds of animals or mariners fishing for sea mammals. Their migrations continued southward down the continents, with various peoples adapting to new environments as necessary. A second group, Norwegian sailors called Vikings, probably reached America about the year 1000. Viking sagas suggest that Leif Ericson or his son was the first European to set foot on the North American continent at a place the Norsemen called Vinland, which may have been south of Newfoundland, though its site is the subject of controversy. Repeated fights with natives, called Skraelings, ended their visits around 1010.

Almost five hundred years later in Europe, a new spirit of curiosity was sparked by the Renaissance and trade with the distant Indies and China. Christopher Columbus, a Genoese sailor seeking a new route to the East Indies, sailed west across the Atlantic Ocean, finding land probably at what he called San Salvador on October 12, 1492. News of his voyage opened the door to an age of exploration, with other Europeans following in search of riches. The name “America” was given to the continents in 1507 by the German geographer Martin Waldseemüller, who derived the term from the name of Italian explorer Amerigo Vespucci (1454–1512). When writing about his own travels to the New World in 1499, Vespucci claimed to be the first to recognize that the Americas were continents previously unknown by Europeans.

Image: First Voyage, Departure for the New World, August 3, 1492 from the Library of Congress.