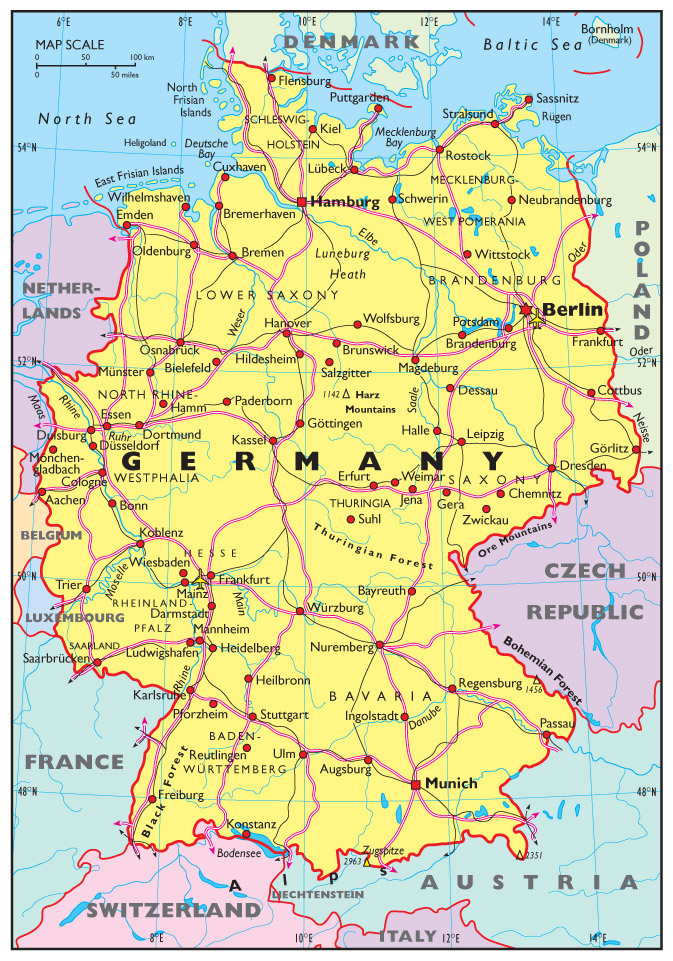 The Federal Republic of Germany lies in the heart of Europe. It is the fifth-largest country in Europe. Germany divides into three geographical regions: the N German plain, central highlands, and the S Central Alps.

The rivers Elbe, Weser, and Oder drain the fertile N plain, which includes the industrial centres of Hamburg, Bremen, Hanover, and Kiel. In the E lies the capital, Berlin, and the former East German cities of Leipzig, Dresden and Magdeburg. NW Germany (especially the Rhine, Ruhr and Saar valleys) is the country's industrial heartland. It includes the cities of Cologne, Essen, Dortmund, Düsseldorf and Duisburg.

Occupied since c. 500 bc by Germanic tribes, the region became part of the Frankish empire by the sixth century ad. Later it became a loose federation of principalities and the nucleus of the Holy Roman Empire until the imperial state was broken up by Napoleon in 1806. Germany became a confederation after 1815 and then an empire centered around Prussia (1871–1918).

Following its defeat in World War I, it was reorganized as the Weimar Republic, which collapsed when Adolf Hitler rose to power and formed the Third Reich. Germany's defeat in 1945 at the end of World War II resulted in its division into four occupation zones, each controlled by an Allied power. Out of the US, French, and British zones West Germany was established in 1949, while the Soviet zone became East Germany. The two Germanies were reunified in 1990 after the fall of the East German Communist government. Berlin is the capital and largest city.