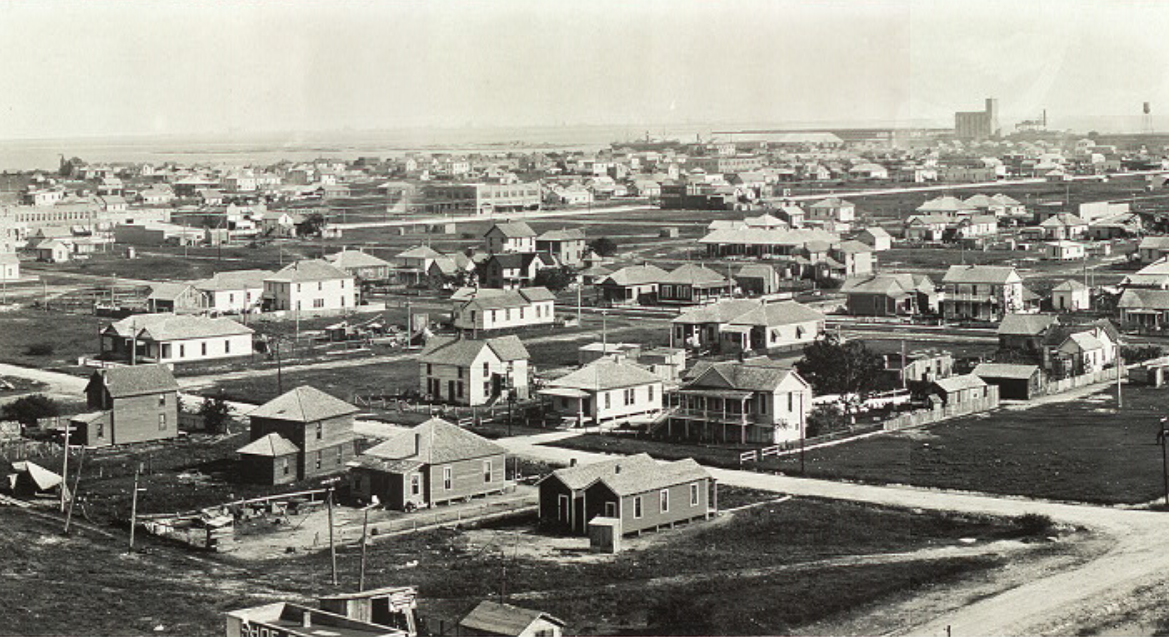 TEXAS CITY, TEXAS. Texas City, on the southwestern shore of Galveston Bay seven miles from Galveston and eleven miles from the Gulf of Mexico in Galveston County, is a deepwater port on the mainland. In 1891, while on a duck-hunting trip to the marshlands of a community known as Shoal Point in Galveston Bay, three brothers from Duluth, Minnesota-Jacob R., Henry, and Benjamin F. Myers-saw that the area had potential as a major port. Other Duluth shippers joined the Myers brothers in buying 10,000 acres of Galveston Bay frontage, including Shoal Point, and renamed the area Texas City.

On May 17, 1893, the Texas City Improvement Company filed the first townsite plat. The same year the post office was established. The population soon was 250, mostly from Minnesota and Michigan. In 1893 the federal government gave the Texas City Improvement Company permission to dredge an eight-foot Gulf channel to Texas City. The company constructed a four-mile rail line to the Texas City junction of the Galveston, Harrisburg and San Antonio and the Galveston, Houston and Henderson railroads, allowing shippers to send freight by train to Houston, where it could join the national railway systems.

By 1911 the number of inhabitants had grown to 1,169, and on September 16, 1911, the city incorporated under the commission form of government with William P. Tarpley, state representative for Galveston County in 1901, as mayor. H. M. Coats and Frank B. Davidson were the first commissioners.

By 1925 Texas City had an estimated population of 3,500. The Great Depression and the strong competition from Imperial Sugar Industries caused the sugar refinery to fail by 1930. Many of the stores in the business district closed, and those that remained struggled to survive. But the continued development of the oil industry contributed to economic recovery. In 1931 the Republic Oil Refinery opened to produce gasoline, chiefly from crude supplied by independent operators in the new East Texas oilfield. The business revival was quickened in 1934 when Pan-America Refinery (forerunner of Amoco), a subsidiary of Standard Oil of Indiana, started operations. The close proximity of the Texas City harbor to the Gulf of Mexico enabled Moore to outbid the Houston Ship Channel for the refinery.

By 1939 the population of Texas City had increased to 5,200. The United States commitment to the war in 1941 furthered the boom in Texas City, propelling it into fourth position among Texas ports. The plants and port were open around the clock to provide materials. More support industries, heavy construction, and port enlargements were undertaken in attempts to meet the increased domestic and wartime demands. Since the Axis threatened England and Holland, the only two sources of tin smelting in the world, the Defense Plant Corporation under Jesse H. Jones decided in 1940 to build a tin smelter in the United States. On a site donated by the Texas City Terminal Railway Company, the Tin Processing Corporation began operation of the only smelter in the western hemisphere. The Longhorn smelter supplied all the industrial and military needs of the free world. The M. W. Kellog pipe-bending plant and Monsanto Chemical Company also came to Texas City as national defense industries. Monsanto built a pilot plant to manufacture styrene used in synthetic rubber. During the war Texas City experienced remarkable growth; by 1950 the population was estimated at 16,620.

The predicted postwar prosperity was postponed when a great explosion shattered the city on April 16, 1947. A French ship, Grandecamp, loaded with ammonium nitrate fertilizer blew up, causing a chain reaction of fires in the other industries along the harbor and the explosion of a United States ship. The disaster, which killed 576 people and injured more than 4,000, caused more than $67 million worth of property damage. Texas City businesses remained, rebuilt, and expanded, and by 1960 the population was 32,065, nearly double that of 1950. This increase in population was largely due to additional chemical, plastics, and petrochemical industries that multiplied the tonnage through the port.

A second major disaster struck Texas City in 1961 when hurricane Carla brought four feet of floodwater over much of the city. In the aftermath of the storm, seawall plans that had been delayed since 1949 were completed, and construction began in 1962 on a twenty-three-foot barrier. The last section of the seawall was completed in 1985. To further protect the city from rising rainwater, in 1982 the city commissioners built an inner levee eight feet high on Moses Lake and installed Archimedes screw pumps. The city developed Moses Lake and Texas City Dike into recreation areas.

In 1954 it built the Nessler Civic Center, a fifty-five-acre tract, which has the city's largest park, the library, the city hall, the stadium, and the Lowry Physical Fitness Center, named for Emmett Lowry, who served as mayor for more than twenty years. In 1962 the surrounding school districts joined Texas City to establish a junior college district. The College of the Mainland opened in September 1967.

The community's expansion has been to the west, with ten major refining and petrochemical industries forming the base of the seaport. The port of Texas City handled 40,955,226 net tons in 1983, a figure that placed it third in Texas and eleventh in the United States. In 1988 the population of Texas City was estimated at 43,551. In 1990 the population was 40,822. The population reached 41,521 in 2000.