Get the best sources on the Constitution. 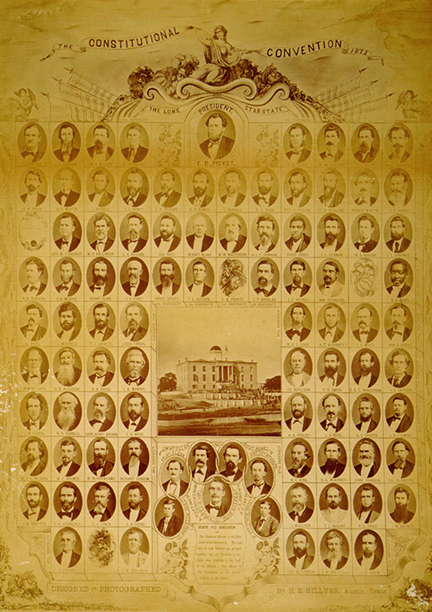 The Constitution of 1876 is the sixth constitution by which Texas has been governed since independence from Mexico was achieved in 1836. It was framed by the Constitutional Convention of 1875 and adopted on February 15, 1876, by a vote of 136,606 to 56,652, and it remains the basic organic law of Texas.

The constitution contains some provisions that are uniquely Texan, many of which are products of the state's unusual history. Some, for example, may be traced to Spanish and Mexican influence. Among them are sections dealing with land titles and land law in general, debtor relief, judicial procedures, marital relations and adoption, and water and other mineral rights. Other atypical provisions may be attributed to the twin influences of Jacksonian agrarianism and frontier radicalism-both prevalent when Texas first became a state and both widely supported by the bulk of immigrants to Texas before the Civil War.

Overall, the Constitution of 1876 complied with public opinion. It provided for biennial sessions of the legislature, low salaries for public officials, precinct voting, abolition of the road tax, and a return to the road-working system; for a homestead exemption clause, guarantees of a low tax rate, a less expensive, locally controlled, segregated school system, and a less expensive court system; for county and justice of the peace courts; and for popular election of officers. It also prohibited the registration of voters and grants of money or bonds to railroads. The document was adequate for a rural people engaged principally in subsistence farming, but not for an urban-industrial-commercial society. Very few changes were made during the first half century of the constitution's existence, but since then it has been changed at a steadily increasing rate. Changes are made through amendments submitted to the voters by consent of two-thirds of the members of each house of the legislature and approved by a majority of those voting.

Most of the numerous amendments have dealt with the legislature, the judiciary, public education, and state finances. In spite of its cumbersomeness, of its need for frequent amendment, and its occasional obscurity, however, Texans have continued to hold on to the Constitution of 1876.

From Handbook of Texas Online, Joe E. Ericson and Ernest Wallace, "Constitution of 1876"