Great for English 2328. Get the best books, eBooks, articles, Internet resources and media on American literature 1910-1945.

Focus on The Great Gatsby 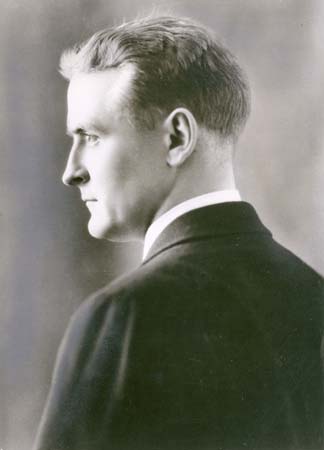 The narrator, Nick Carraway, rents a cottage in West Egg, Long Island, next door to the mansion of Jay Gatsby and across the water from the home of Tom Buchanan and his wife Daisy, Carraway's cousin. Gatsby's mansion is the scene of extravagant nightly parties, attended by many people who are uninvited and do not know their host. Carraway, both cynical and curious about Gatsby, soon becomes his confidant. He learns that Gatsby had met Daisy while he was in the army during World War I, and that they had fallen in love and planned to marry. Daisy, however, had grown impatient for him to return and had married Tom, a rich though boring man from Yale. Having risen from his lowly origins as Jimmy Gatz through dubious business deals, Gatsby is obsessed with winning Daisy back. He persuades Carraway to arrange a meeting between them, and Daisy, after initial resistance, succumbs to her former lover's generous attentions, impressed by his newly acquired wealth.

Tom, Daisy, Gatsby, Carraway and Carraway's girlfriend, Jordan Baker, spend a day together in New York. Tom, who himself has had a longstanding affair with Myrtle Wilson, the wife of a Long Island garage owner, becomes aware of Daisy's attentions to Gatsby. Gatsby tries to convince Daisy to leave Tom. Tom, in turn, tries to discredit Gatsby by revealing that he has made his money from bootlegging. Gatsby and Daisy leave in Tom's automobile, with Daisy driving. Myrtle Wilson, recognizing the car as it passes her husband's garage, runs out into the street and is hit and killed by Daisy, who drives on. Taking revenge on Gatsby, Tom tells Wilson it was Gatsby who killed his wife, and Gatsby attempting to protect Daisy, lets the blame fall on himself. Wilson murders Gatsby and then commits suicide. Carraway is left to arrange Gatsby's funeral, which hardly anyone attends, and Tom and Daisy retreat ‘back into their money, or their vast carelessness, or whatever it was that kept them together.

From CREDO The Great Gatsby: Cambridge Guide to Literature in English.