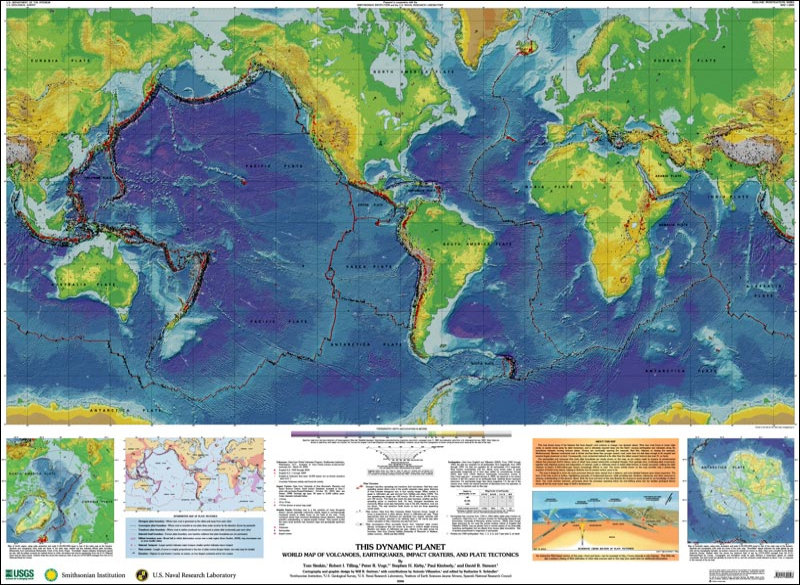 Have you ever noticed that the Earth’s continents seem to fit together like pieces of a puzzle? This observation led the German meteorologist Alfred Wegener to propose the theory of continental drift in 1915. Since rocks and fossils were found to match up in parts of different continents, it seemed that they must have once been joined, but no one could explain how such large landmasses could move so far apart.

This problem was not solved until the 1960s, when the theory of plate tectonics was proposed. According to this theory, the continents move by riding piggyback on plates — huge slabs of the Earth’s lithosphere — that are much larger than the continents themselves. The plates move like parts of a conveyor belt powered by huge convection currents of molten rock that many geologists believe is heated by the decay of radioactive elements deep within the Earth.

Although they only move a few inches per year, over hundreds of millions of years the continents are carried thousands of miles. Along their boundaries, the plates crumple, scrape, or pull apart from one another, giving rise to volcanoes and earthquakes and creating and destroying rock on the ever-changing surface of the planet.

Image: This Dynamic Planet - World Map of Volcanoes, Earthquakes, Impact Craters, and Plate Tectonics is a joint project of the Smithsonian, USGS and the US Naval Research Laboratory. Click on the map to interact.