Great for Geology 1403. Get the best books, eBooks, articles, media and open access sources on geology. 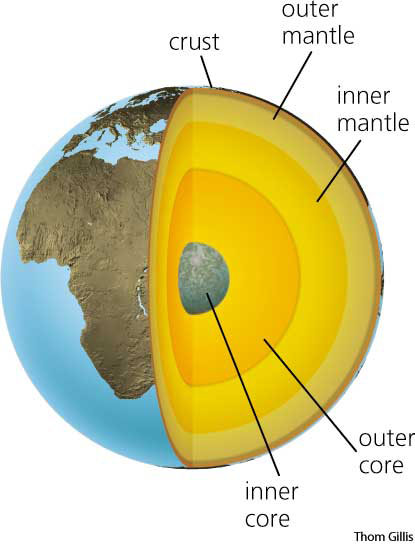 Scientists have found out that the Earth has an overall diameter of approximately 12,756 km/7,926 mi. It is made up of four main parts.

The inner core is made up of solid rock at very high temperature (about 4,300°C) and pressure. It has a high density (about 15 g cm−1). The temperature is maintained by the insulating effects of the outer layers of the Earth, and is due to radioactive decay of naturally occurring potassium, thorium, and uranium giving out large amounts of energy as they do so. The diameter of the inner core is about 2,530 km/1,570 mi.

The mantle makes up the rest of the Earth (apart from the thin crust). The mantle is a layer of thick dense rock. Within the mantle is molten rock called magma – it is this which erupts to the surface in volcanoes.

From CREDO The Earth: Structure and Atmosphere in The Hutchinson Unabridged Encyclopedia with Atlas and Weather Guide