Great for Biology 2420. Get the best resources for microbiology. 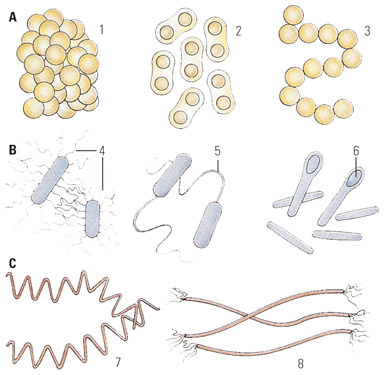 Simple, unicellular, microscopic organisms. They lack a clearly defined nucleus and most are without chlorophyll. Many are motile, swimming by means of whip-like flagella. Most multiply by fission. In adverse conditions, many can remain dormant inside highly resistant spores with thick protective coverings. Bacteria may be aerobic or anaerobic. Although pathogenic bacteria are a major cause of human disease, many bacteria are harmless or even beneficial to humans by providing an important link in food chains, by decomposing plant and animal tissue, or converting free nitrogen and sulphur into amino acids and other compounds that plants and animals can use. Some contain a form of chlorophyll and carry out photosynthesis. Bacteria belong to the kingdom Prokaryotae.

Bacteria occur in three basic shapes: spherical forms called cocci (A), rod-like bacilli (B), and spiral spirilla (C). Cocci can occur in clumps known as staphylococci (1), groups of two called diplococci (2) or chains called streptococci (3). Unlike cocci, which do not move, bacilli are freely mobile; some are termed peritrichous and use many flagellae (4) to swim about, while other monotrichous forms use a single flagellum (5). Bacilli can also form spores (6) to survive unfavourable conditions. Spirilla may be either cork-screw-shaped spirochaetes like Leptospira (7), or less coiled and flagellated, such as Spirillum (8) - magnification x 5000.